Local non-profit organisations who are engaged in fighting economic and social problems in Kreuzberg are facing more and more the challenge to achieve financial sustainability. Organisations which implement excellent and highly needed projects in their neighbourhood for many years, often lack key competences in the field of secure and constant financing. Knowledge and competences in the acquisition of monetary and material resources have to be expanded and strengthened urgently. The local or  ganisations are expressing the wish to gain competences which help them to improve their strategies and practices of financing, e.g. in the field of foundations and fundraising.

Camp Group advocates its expertise in the field of organisation and project management through the new consulting project “fundraising qualification”. We actively support the non-profit sector in its goal to achieve sustainability. Altogether we consult 13 local organisations.

The goal is to empower the organisations to cope with the challenges of financing and to secure sustainable structures and finances during times of a constantly changing landscape of sponsors and fundraising. Those organisations provide valuable and indispensable support to the local community and it is crucial to secure their essential contributions. Therefore, we are going to work together in the upcoming two years to establish needed competences and strategies. Our consultancy aims to strengthen and stabilise the independence and sustainability of the organisations. The key elements of the consulting projects are strategies of financing, sustainable project implementation and impact improvement.

During the kick-off event in the beginning of April, a first analysis of individual needs was developed. Further the participants of the project had the chance to network between each other and to inform themselves about the platforms betterplace.org and Youvo, thanks to the attendance and presentation of those two organisations during the event. The start of the project has been a great success. We are all motivated to secure sustainability and improve impact together and are looking forward to the collaborative work in the upcoming months. 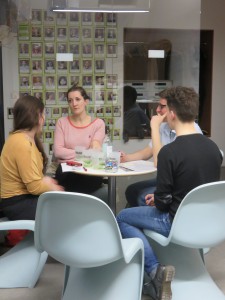 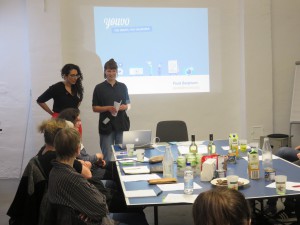 We sincerely thank the Quartiersmanagements Center Kreuzberg / Oranienstraße who made this essential consultancy project possible through their support.

For further information about the project and support on securing sustainability of non-profit organisations please contact Camp Group:

“It is very interesting to see the development of the RespAct team. They are using a lot of methods that are common in the world of tech and start-up companies, but not in NGOs working in the education sector”, UX mentor Ben explains at the Launchpad.

Our experience at Google Launchpad 2016 was incredibly energizing for our team. The day long workshop offered new and more efficient tools for us to consider when designing welcome classes on social innovation and technical know-how. 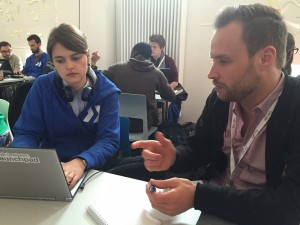 As a team, we’re always interested to find new ways to increase and track the impact of our programs and working with other social-impact companies was a definite highlight. Together we took our ideas on innovative tools and technical support that promotes the development of educational materials to the next level. All of this brainwork and planning will help us to move forward on our plans to develop a tool that helps migrant children in welcome classes to learn German.

Our goal is to integrate German-language learning with elements of sports and play. After the session with Google Launchpad we are ready to move onto the next step of designing what that tool will look like.

In order to meet the needs of teachers and students with our tool several interviews were conducted. We want to understand what challenges and difficulties teachers experience while teaching welcome classes and which tools would help them the most. We’re particularly interested in speaking with teachers on how sports and games can be incorporated into existing lesson plans.

These are the types of questions that our team will be exploring in the coming months as we get into the hard work of innovating on educational tools that will help children and adolescents to adjust to life in Germany.

This year the UN Commission on the Status of Women will celebrate 60 years of improving the living conditions of women around the world. Among the biggest milestones of the commission is the enforcement of UN resolutions for the advancement of equal political rights for women.

Boxgirls founder Heather Cameron offered her support for the initiative and the role of sports for development by stating, “Sports strengthen, build and show possibilities for own activities”.

This year saw political leaders, heads of state, and more than 8,000 participants from civil society organizations gather to discuss how the UN’s Sustainable Development Goals can be used to strengthen the role of women—and vice versa. The role of using sports in achieving the goals of the UN Commission as a way to engage youth and promote sustainable communities was acknowledged through a panel discussion on the topic.

Cameron was invited to the panel discussion as an expert guest to discuss the importance of sports engagement as a tool for sustainable development. “Sport for women also means to me that local communities enable women the access to possibilities in the sector of sports. This often brings along a debate about the role of women in society”, said Cameron. “Sport gives women and girls space to initiate public discussions about additional relevant topics, e.g. the access to education and personal safety”.

The panel was packed with women in positions of leadership and who have both the passion and the prestige to affect real change around sports for development nitatives and programs. Cameron was joined on the panel by Maria Arágo of Valencia CF which is a football club dedicated to the development of women’s rights, Antonio de Aguiar Patriota who is Brazil’s permanent representative in the UN, Khalida Popal the former captain of the women’s Afghan national football team and Nicole Hoevertsz who was named one of the “25 Most Influential Women in Sports”. They all have in common massive knowledge and passion for sport’s contribution to personal and societal development.

The panel discussion was guided by the President of UN Women, Phumzile Mlambo-Ngcuka. As a South African native and a committed women’s rights activist, Mlambo-Ngcuka has supported Boxgirls’ work with girls and women in South Africa – and now is proud owner of a Boxgirls T-shirt as well.

We are pleased to report that Camp Group is active now in yet another region of the world. Founder, Professor Dr Heather Cameron and Daniel Meehan from Camp Group are consultants in Kabul, Afghanistan for the German Association for International Cooperation (GIZ). They will conduct workshops regarding the effective use of sports in the primary school curriculum. Particularly, the inclusion of girls in PE classes is a main focus. In Afghanistan, boys and girls attend school separately, which gives girls the chance to work out and to move freely within the safe environment of sports at school, unlike the reality of everyday life in Afghanistan.
The GIZ’s special branch for sports and development is a partner of Camp Group in this project, as is the ministry of education in Kabul.
The next trip to the Middle East is due soon and this time, concrete sports and movement units in the form of ball instructive elements and concepts regarding playing and handling a ball will be the focus.
The main aim of Camp Group’s work in Kabul will be to strengthen the respective schools, help in developing up-to-date educational approaches and curricula as well as support the cause of including girls and women in the schools’ systems.
The team will be equipped with a variety of basketball, handball, volleyball and further ball games and drills. Easy, playful, effective techniques on instructing sports courses for girls will passed on to teachers in Afghanistan.
In addition to that, videos, interviews, and group discussions will promote the exchange and dialogue among the Afghani Ministry of Education, the GIZ and CampGroup. The footage will also contribute to the final evaluation of the workshops.
As for future plans, Camp Group is creating project ideas that include working together with refugees, specifically Afghani refugees, in creating digitalized extracurricular projects, that can be implemented in their countries of origin as well as in Germany. This was one of the project ideas that Camp Group applied to the Google Impact Challenge Berlin with.
It is one of our organisational goals to provide services through the medium of digital technologies and Apps that can be used by individuals who do not necessarily live in the direct regions where we work. We are very enthusiastic about these and other project ideas with which we will be able to reach out to further groups of people and individuals.